In April 2019, the Leuven Institute of Criminology (LINC) KU Leuven KU Leuven celebrated its 90 years of existence. On that occasion, John Braithwaite, who is an honorary doctor of KU Leuven, joined LINC. With Ivo Aertsen, we took this wonderful opportunity and decided to organise an international seminar on restorative responses to environmental harm. John Braithwaite’s work has a unique feature: it is both foundational and pioneering. He and his team in Australia are among the first to have engaged in cases of restorative environmental justice.

Our seminar brought together scholars, activists and practitioners to dwell in depth into this intersection. Whereas communities, activists, scholars, and scientists have primarily focused most of their energies into developing laws and making policies that identify, recognize, regulate, condemn or punish actors of ecocide, corporations or other authors that perpetuate environmental crime and harms, many have started recognizing the value and potential of restorative responses to these problems, especially the alignment of a restorative philosophy that is embedded in indigenous justice and environmental justice. In whatever version it comes, the restorative justice perspective is driven essentially by the principles of participation, harm reparation and healing, principles that must be central in conceiving environmental justice.

Despite its potential, environmental harm also raises several challenges to restorative justice, which we wanted to explore in the seminar. Who are the victims of environmental harm, how are their rights ensured and how can they have a voice in restorative processes? Who is entitled to speak on behalf of future or past generations and nature (animals, plants, rivers, land, climate)? What kind of expertise is required to adequately speak for the non-human? What are the criteria by which judgements around harm or victimisation are to be made, and what are the criteria by which judgements around repair and restoration are to be made? How can we repair the irreparable? How can we assess who the perpetrators are and how can we ensure their voluntary participation in restorative processes?

His talk was followed by a presentation by Femke Wijdekop, a scholar and activist at Environmental Justice IUCN NL, and Anneke van Hoek, a criminologist at Restorative Justice Nederland. They explored from different perspectives whether restorative approaches to environmental conflicts from Australia and New Zealand can be adapted to the Dutch context. Femke Wijdekop took us into deep philosophical reflections, which traced the commodification of nature as the heart of the problem, arguing that we need to move from a right to exploit to a duty of care. Anneke van Hoek brought insights from a criminological and philosophical perspectives to the debate by referring to an intersection of positive and green criminology.

Next, Carolin Hillemanns, a senior researcher at the Max Planck Institute for Foreign and International Criminal Law considered the potential of restorative justice in addressing environmental crimes basing her reflections on Germany. Based on a legal perspective, her talk focused on the importance of national and international legislation and their scarce application to environmental crimes, further reflecting on the (potential) application of restorative justice to these cases while highlighting important limits.

The seminar continued with two presentations based on the research project “Victims and Corporations”. Claudia Mazzucato, professor at the Università Cattolica del Sacro Cuore, presented the results of the project and reflected on the needs and rights of victims of environmental harm and corporations, illustrating with real cases of environmental harms. Her main recommendation is to increase as much as possible cooperative and participatory strategies and networks, even to the cost of demanding the impossible. According to her, the strength of the restorative approach is in that it can bring around the table ‘difficult’ actors and can create seemingly improbable and unlikely alliances and shared responsibilities. Katrien Lauwaert, who is policy coordinator at the Moderator Forum for restorative justice and mediation, made the bridge from victims’ needs to restorative responses. She based her analysis on multiple interviews and focus groups with victims of corporate violence and organisations and professionals that are in contact with them to identify the features of the cases and assessed the views of the mediators and of the organisation Moderator about the possibility of handling these types of cases in the future.

The next intervention was by Maria Lucia Cruz Correia, an artist and environmental researcher, who presented her artistic quest for restorative interventions in cases of ecocide, a quest that culminated in the participatory theatre called the Voice of Nature. For this piece, I have collaborated together with the artist, and we will continue our collaborations in the future. Her work has already been presented in Belgium and is currently travelling throughout Europe (Switzerland, Slovenia and Finland) at several art festivals. 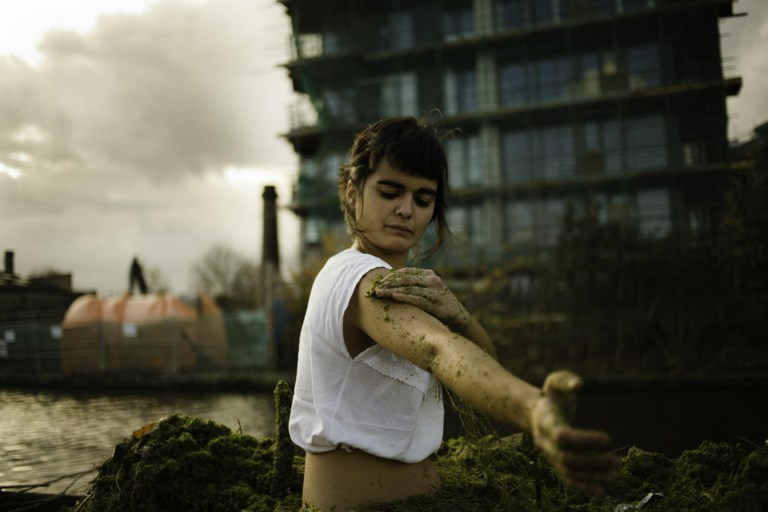 Maria Lucia Cruz Correia during one of her environmental art performances

The last presentation was by Bas van Stokkom, professor at the Radboud University, who presented on corporate behavior and responsive regulation, drawing sobering lessons for environmental restorative justice. Despite all the cautious insights that result from studying corporations critically, in his conclusion, Bas Van Stokkom urged for restorative forms of responsive regulation whenever possible and as a first option. The seminar was concluded by Ivo Aertsen, professor at the Leuven Institute of Criminology. According to him, restorative justice theory and principles can be applied to environmental harms and promising and creative practices already exist. Nevertheless, we need more advanced ‘test’ cases, accompanied by evaluation, where victims and their organisations, together with public authorities and corporations courageously explore new restorative avenues. The presentations were always followed with in-depth and lengthy discussions. We were fortunate to have with us, among others, restorative justice scholars Martin Wright (involved in Action for Bhopal) and Lode Walgrave, but also engaged and committed students and researchers from all over the world.

The seminar aimed at creating a path for future research, commitments and engagements and has already led to a few additional initiatives. First of all, a network has been created, where not only the participants but also other interested researchers and practitioners have joined forces. The network is maintained and updated by me and Ivo Aertsen. The EFRJ has also taken a few concrete steps. One is a booklet which will be launched for the #RJWeek 2019. This will be a collection of ideas, projects, and testimonies on restorative environmental justice and will be coordinated by me and Emanuela Biffi. Videos of the presentations and discussion in the seminar will soon be posted on the vimeo site of the EFRJ. The EFRJ will also launch a Working Group on the topic in 2020. Further, I plan to coordinate and edit a special issue for the International Journal of Restorative Justice by the end of 2020 and edit a book collection on the topic. The network will collaborate in the future to organise other events and launch common (action) research projects. If you are interested in the topic, get in touch and become part of our network (or any of the other initiatives). As John Braithwaite said: our planet needs all the restorative power there is!

Brunilda Pali is an FWO funded postdoctoral researcher at the Leuven Institute of Criminology. She is also a board member and Secretary of the European Forum for Restorative Justice. Brunilda has studied Psychology in the University of Bosphorus, Gender Studies in the Central European University, Cultural Studies in Bilgi University, and Criminology in KU Leuven. Her areas of interest are feminism, critical social theory, social justice, restorative justice, and arts.​